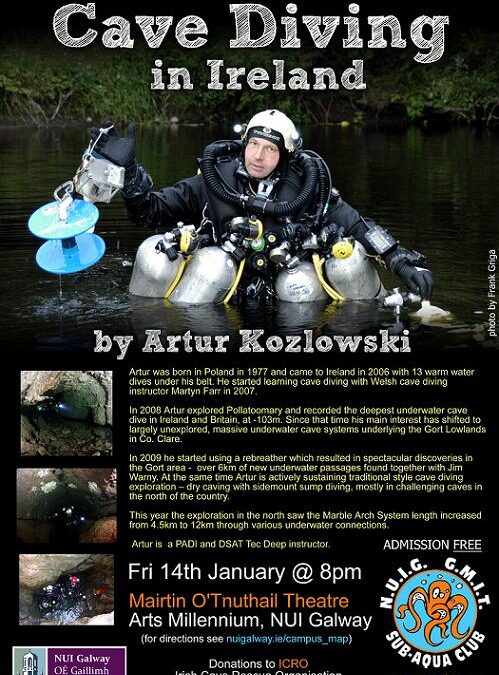 Short description: Artur’s talk has been rescheduled for this Fri @ 8pm in NUI Galway

Artur was born in Poland in 1977 and came to Ireland in 2006 with 13 warm water dives under his belt. He started learning cave diving with Welsh cave diving instructor Martyn Farr in 2007.

In 2008 Artur explored pollatoomary and recorded the deepest underwater cave dive in Ireland and Britain, at -103m. Since that time his main interest has shifted to largely unexplored, massive underwater cave systems underlying the Gort Lowlands in Co. Clare.

In 2009 he started using a rebreather which resulted in spectacular discoveries in the Gort area – over 6km of new underwater passages found together with Jim Warny. At the same time Artur is actively sustaining tradional style cave diving exploration – dry caving with sidemount sump diving, mostly in challenging caves in the north of the country.

The year the exploration in the north saw the Marble Arch System length increased from 4.5km to 12km through various underwater connections.

Artur is a PADI and DSAT Tec Deep Instructor.